The BBC period drama Peaky Blinders did not only capture the attention and imagination of millions of viewers worldwide, but it also brought back the trend of wearing flat caps. In the UK, sales for flat caps increased significantly in 2019. It’s not surprising that fans of the show were particularly drawn to the flat cap. Each Peaky Blinders character had a different suit style. What they had in common was the flat cap. It is quite easy to rock the Peaky Blinders flat cap style, there are just a few things that you should keep in mind.

The flat cap has been around since the 16th century. In 1597, the English Parliament passed a law that made it mandatory for working-class males over the age of 6 to wear woolen caps. 30 years after the law was revoked, people were still wearing flat caps. In England and especially Ireland, flat caps were always quite popular, although they weren’t always trendy. Although flat caps are not high fashion, their popularity was maintained partly thanks to celebrities who wore them off-screen. In the last few years, thanks to the Peaky Blinders series, the Peaky Blinders look which was popular 100 years ago is now having a major comeback. This is mainly because the flat cap is now associated with the idea of heroism, manliness, and toughness thanks to the series.

How to sport the Peaky blinders flat cap style

In order to get that cool Peaky Blinders to look, you first need to choose the perfect flat cap. The style that was popularized by Peaky Blinders is the newsboy cap. In the 1920s, the period in which the drama is set, the newsboy cap was no longer just the headwear of the working-class man. even the Duke of Windsor was wearing it. If you like this style, you can check out Exclusively Irish for stylish and high-quality Irish Flat caps. When you buy a flat cap, make sure to choose the right size for you. An extra tip: if you want to stick to the classics, buy a flat cap that is made of wool or tweed, this would work best for a Peaky Blinders look. If you really want to get that Peaky Blinders-inspired look, you need to add a full-length overcoat. Don’t forget about the white shirt. You can also add a bowtie or tie. If you want to go extra you might also add the 3-piece suit that is so characteristic of Peaky Blinders.

The legacy of the Peaky Blinders style

2019 was a great year of flat caps. The sales increased significantly and the flat cap also made it to London’s fashion week. That came about when a famous menswear label made a collaboration with the BBC drama Peaky Blinders and launched a collection that was inspired by the show. The brand is Kent & Curwen’s, which is part-owned by David Beckham, who is a flat cap fan himself. The collection included frock coats and tailoring, but flat caps were the center of attention.

How to Combine Colours in Your Home 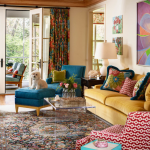